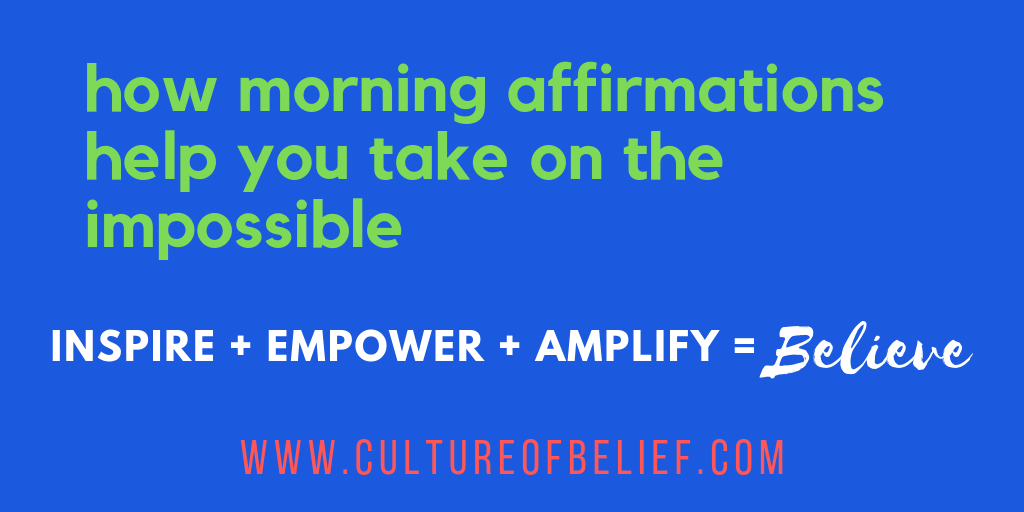 Recently, I was watching the news story of Colin O’Brady, an American endurance athlete and adventurer, who had just accomplished an amazing feat. He walked across Antarctica solo and without aid, traversing over 900 miles across the South Pole. (Watch the news story here: Doing the Impossible) Of course, one of the first, and very natural, questions people ask is, “How did you do it?” Colin pointed to several things, including a year’s worth of planning and logistics. But two things in particular caught my attention. Colin spoke of his purpose, wanting to do something bigger than himself and inspiring others to take on the impossible in their lives along with what he called his mental mantra, several things he told himself daily.

Knowing your why and being positive are two of the ways I reflect on in one my past posts, Let’s be UNrealistic Together. Both are necessities if you want to trade in small thinking for impactful, make it happen, move mountains and bring others along while doing it kind of visions, but being and staying positive ranks up there as one of the top priorities. We are all going to face challenges in our lives and those hurdles loom larger the bigger we dream. Then add in the fact that our brains are wired for survival mode, meaning we are biologically made to think worst-case, negative scenario, and we clearly need to develop strategies that keep our thinking positive and fuel our beliefs.

One specific example that Colin exemplifies is how to remain positive and speak belief to the liar that is our own fears. His daily mantra that he woke up telling himself kept his mental challenges at bay and helped him realize the best, most capable version of himself. He was able to accomplish a seemingly impossible goal and dream of his despite innumerable obstacles.

I am not dreaming of crossing Antarctica anytime soon, but I do dream of impacting those in my school and beyond in ways that help them achieve things that seem impossible. The challenges any public educator faces are large and even on the best of days it seems we have been given a mountain to move. One of the routines I’ve developed is using a set of personal statements with which I begin each day. My morning affirmations (click here to see them), as introduced to me by Danny Bauer, are a set of assertions that are specific in nature, support and clarify my why, and help empower my inner thoughts to fuel my belief and tear down my fears. Sometimes I tweak them, but for the most part they are a constant set of deep-down beliefs that I know I need reminding of daily. And as corny as it sounds, I say them out loud. Every day. I figure my dreams of what I want to accomplish in this life are impossible enough that they deserve all the positive energy I can throw their way.

We all tell ourselves a story. This story is made up of internal dialogue that, if we’re not careful and intentional, can speak a lie so scary that we’ll be sure not to ever accomplish anything worth doing. When you start telling yourself things like “You can do this,” you start realizing all you actually can do. And you are certainly capable of achieving greatness you never thought possible.

What story are you telling yourself? What affirmations could you develop that would empower you to take on the impossible?